The Investment Asset of the Century Makes yet another Comeback

Even the most ardent cryptocurrency bulls are probably slightly slack-jawed at this juncture and can hardly believe it. To be sure, many people were undeterred by the vicious bear market that saw BTC melt down from just below $20,000 in December 2017 to less than $3,300 in December 2018, but we doubt that even these steadfast believers in the grand-daddy of cryptocurrencies expected to see new all-time highs in less than two years. Oh well…

Look who’s back from the dead…

BTC, weekly – who says a bubble cannot be resurrected in two years’ time?

The nice thing about cryptocurrencies like Bitcoin is, of course, that no one has the foggiest idea what they should be valued at. All that is known in the case of BTC (apart from the undeniable technological progress the blockchain represents) is that it has a fixed supply. Apparently that means that any fantasy number can be thrown out by forecasters, and they are definitely not shy about doing just that.

In fact, analysts are beginning to trip over each other with ever more aggressive predictions. Deutsche Bank has, for e.g., recently arrived at a price target of $318,000 for BTC – one-upping a number of vertigo-inducing price targets announced previously by its competitors. The current rationale/narrative is that institutional adoption of cryptocurrencies as a viable asset class is bringing in a flood of money – which, in light of the fixed and fairly small supply, can only drive prices higher.

So far, so correct – this is indeed what has happened in recent weeks. Many well-known investment funds and several listed companies have purchased BTC or have announced plans to do so, and BTC has rallied with gusto.

Nevertheless, the sudden rush by mainstream financial institutions to embrace BTC must be considered worrisome for the bullish case. Readers may remember that the 2011 peak in gold prices was also preceded by a sudden flood of mainstream endorsements.

Meanwhile, a new trend has taken the place of the ICO craze of 2017: decentralized finance, a.k.a. DeFi, has made quite a splash this year. It is proving to be quite a bonanza for all involved. Interesting new blockchain projects have been thrust into the limelight in the process (all of which come with their own tradable tokens, natch).

It is a playground that requires one to be equipped with large dollops of faith and wagonloads of risk tolerance, and yet, growth has been brisk. A more in-depth discussion of this varied and complex new area of cryptofinance will have to wait for another time – we mention it mainly because the DeFi boom has triggered a veritable flood of wheeling and dealing, and is undoubtedly one of the drivers of the recent uptrend, as it provides crypto-land with a bullish narrative.

A major beneficiary is inter alia Ethereum/ETH, as its blockchain is home to many of the smart contracts that administer DeFi applications. Moreover, demand for ETH tokens has been stoked, as they are needed to pay for transaction fees – just as the ICO craze stoked demand for ETH tokens (and BTC), which at the time were often needed to pay for newly issued coins and tokens.

ETH daily – hand in hand with the expansion of the DeFi business, the second-largest cryptocurrency by market cap has advanced from a crash low of $88 at the height of the pandemic panic in March to almost $680 in December.

The most important major driver of the uptrend is, of course, money printing – in fact, this is the reason most often cited by hedge fund managers and other institutional investors for their interest in BTC. Cryptocurrencies and gold are both seen as hedges against currency debasement, and while cryptocurrencies are (rightly) regarded as riskier than gold, they are also seen as potentially more rewarding. 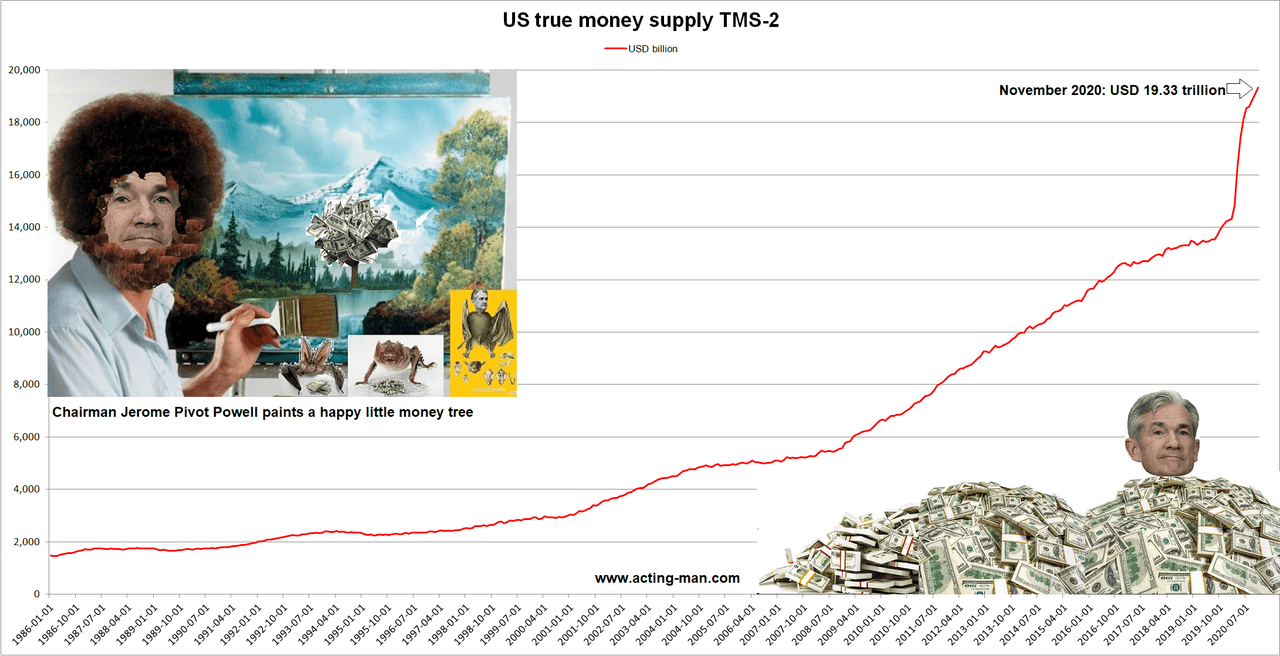 US broad true money supply TMS-2. There is now almost four times as much money in the US economy as in 2007. It is no wonder that asset prices are exploding – at issue is mainly when the effects of this enormous monetary inflation will spill over into consumer prices. Central bankers obviously don’t care about the distortion of relative prices in the economy fostered by their policies – but a rapid increase in CPI would represent quite a challenge for them, especially if it happens in conjunction with a weak economy.

We believe these assets are complementary from an investment perspective. Large gains in BTC are likely to be positive for gold, as gold is undoubtedly an asset regarded as a suitable target for diversification purposes when big profits in BTC are booked.

We are agnostic as to where Bitcoin will go, but as we said back when it was trading at less than $200 – it is here to stay (by the way, feel free to have a good laugh at our expense when you see the title of that article and our lukewarm “this is not a recommendation”-recommendation of BTC as a “short- to medium-term trading buy” at prices just below $200!).

At the current stage of their evolution, we continue to regard BTC and other large cryptocurrencies as secondary media of exchange. Many specialized tokens will forever remain secondary media of exchange, but the major coins harbor at least the potential to become money. Of course, BTC also remains an outstanding trading vehicle, which is probably its most relevant feature from our personal perspective. 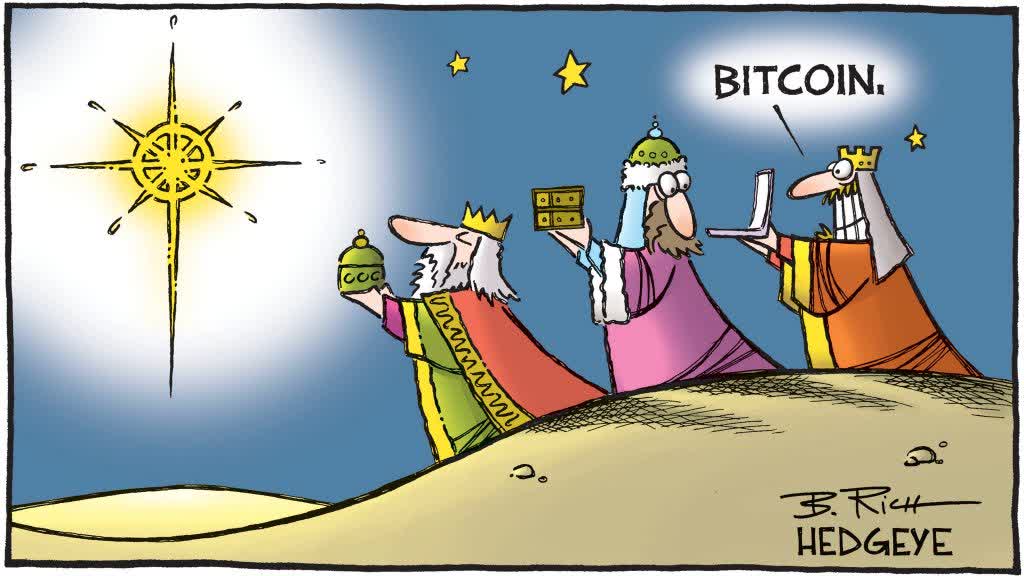 Are There Still Opportunities?

In light of rampant euphoria in stock markets (sentiment and positioning gauges are currently extended into hitherto uncharted regions of La-La land) and similarly overstretched bullish sentiment in cryptocurrencies, it is probably best to exercise caution. Read: one should avoid chasing these markets and if one sits on gains, make sure one hangs on to them.

That said, relentless bull markets driven by unbridled money printing have a habit of “going parabolic” in their latter stages. Often, these phases are interrupted by steep and scary short-term corrections, only for the market to quickly snap back and resume its advance. The largest gains usually occur in a very short time period – a few days can make a big difference (trailing stops may be worth considering).

Traders may want to take a look at so-called “alt coins”, i.e., coins that are not BTC. A recurring feature of previous incarnations of this boomerang bubble (including 2017) was a run-up in alt-coin prices on the coat-tails of big rallies in BTC. This is very similar to the traditional rally in 5-letter stocks in the stock market at the tail-end of lengthy bull markets.

Arguably, it has already begun – consider, for e.g., LTC (Litecoin), which has recently begun to move up quite rapidly:

LTC daily – one of the more prominent “alt-coins” has recently begun to take off like a scalded cat.

Note: We are not saying one should go and buy LTC here. We have no idea whether it will continue to rise. We are merely using it to illustrate the point that alt-coins have a tendency to advance with a lag in the wake of large rallies in BTC.

This lag is not uniform, which is to say there are always laggards that are likely to join the rally next. Note that rotation between different alt-coins will probably come to an end a little while after the next major peak in BTC.

As a reminder in this context: after BTC topped out on December 17, 2017, ETH initially pulled back in sympathy to an intraday low of $510 on December 22, but then proceeded to rally to an intraday high of $1,420 on January 13 – i.e., it peaked almost a full month after BTC and tacked on nearly 200% in the final leg up (this was likely an echo of the ICO boom).

Things will probably play out in a roughly similar manner when the current move ends. Whether ETH will be in focus again remains to be seen. There are many new coins and tokens that have risen to prominence on the back of the DeFi boom, and recent market action suggests most of them remain on the radar of traders. In other words, there is no shortage of candidates.

As a final remark: cryptocurrencies and the stock market have been positively correlated of late. In a missive on the Nikkei/JPY correlation, we stressed that one should not put too much weight on well-worn inter-market correlations, as they can, and do, frequently break down.

However, if a correlation is a relatively recent phenomenon, driven by the same fundamental developments (in this case, a surfeit of central bank liquidity) and the sentiment backdrop for the markets concerned shows strong similarities, it is a good bet the correlation will persist in the short to medium term – perhaps combined with a small lead/lag relationship. We believe this will be a useful datum to keep in mind in this case.

Editor’s Note: The summary bullets for this article were chosen by Seeking Alpha editors.